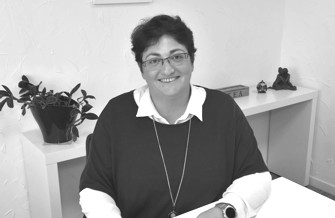 Fluent in four languages (French, Spanish, Catalan and English), Mrs Rose-Marie QUINTANA graduated in both law and foreign languages, which is a considerable asset when drawing up international contracts or assisting you in the relevant language.

Mrs QUINTANA’s appraisal of the French-Spanish border (and above all of the French-Catalan border) is highly requested, and she intervenes not much locally (both in the South of France and Catalonia) as before the institutions of the European Union.

She has also written fact sheets (financed by the European Union) for professionals (CULTURPRO project).

Master’s degree in Politics, Identities and Territories in Europe (Top of the class – with honors)

Postgraduate diploma in law of the national, international and European procedures.

Presentations, teaching, research and appraisals since 2005 :

For the attention of the French professionals (in France), in particular :

- Congress of European Law 2006 – Perpignan, Conference about the settlement of the pensions when   working in several European countries ;

- Congress about the workers’ mobility in 2008 – Convention Center - Perpignan, Speech “Mobility and Tax   System in Europe”

Oct. 2010 – Strasbourg : round table on “How attractive can cross-border territories be ?”

The Council of Europe Colloquium "Build bridges across borders"» oct. 2010 in Strasbourg.

Cross-border Catalan Euro-Institute : different presentations both in France and in Spain on the legal and tax aspects of borders and professional integration

Applied research at the ICRESS in co-supervision (University of Perpignan – University of Gerona) : research theme: “From the legal and tax frame to the achievement of commercial activity within the cross-border Catalan area”